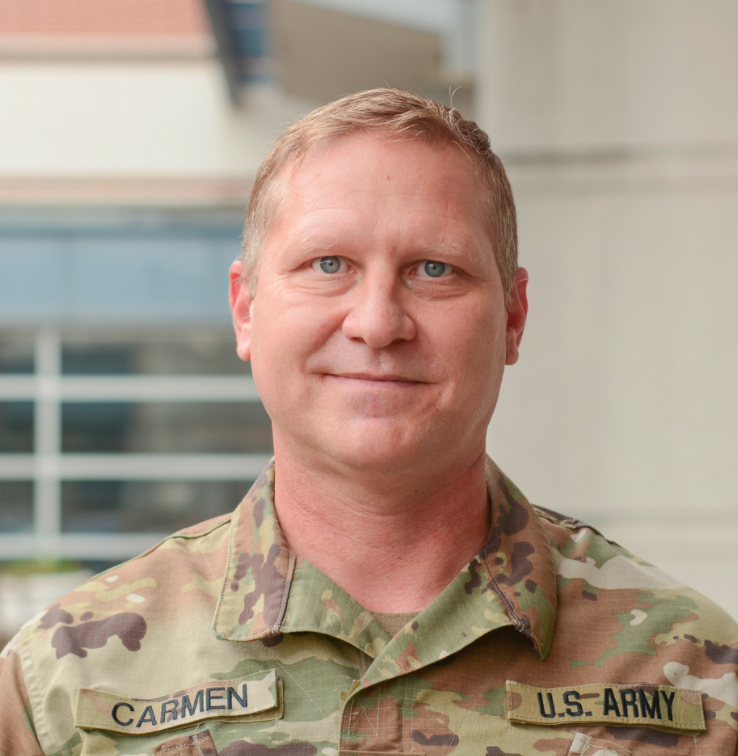 MAJ Joshua Carmen is a Research Scientist in the Laboratory of Antigen and Adjuvant Research (LAAR). He has been with the Army for over 18 years. He first enlisted as a medical laboratory technician and was later commissioned as a medical operations officer. Most recently, he became an Army Microbiologist and joined MHRP, his first duty station in that capacity.

Currently, he is primarily engaged in in support of EIDB’s SARS-CoV-2 vaccine effort with a focus on the cellular responses generated during pre-clinical work. He is working to better understand the kinetics of the ALF-family adjuvants in animal models to improve future vaccine design.

Aside from the recent pivot to SARS-CoV-2, MAJ Carmen works on MHRP's HIV efforts as well. He says, “I have already learned a tremendous amount about HIV in the areas of host-pathogen interactions, host immunity and therapies. More importantly, I have been able to learn about the ALF adjuvants and the myriad of applications to which they are suited.”

He enjoys the benchwork and discussions about the results of the work. His favorite part of the job is “figuring out how to interpret the data that, hopefully, answers your experimental question and what new questions have been generated that need exploring is a cycle that I don't think will ever become tiresome.” He added that it depends on the people you work with, “the other members of LAAR are knowledgeable, professional and selfless which is key to having a great work environment and improves the science, overall.”

He believes MHRP’s mission is critical for the Army, the people of the United States and the world. More specifically, he said “LAAR’s support of that mission is immensely important and has a broader application throughout the infectious disease field."