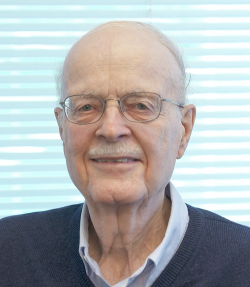 Dr. Alving has been a research investigator at the Walter Reed Army Institute of Research (WRAIR) in Silver Spring, Maryland, since 1970. His education and training include a B.S. from Haverford College; an M.D. from University of Miami Miller School of Medicine; and an internship and residency in medicine and a fellowship in pharmacology at Barnes Hospital and Washington University in St. Louis. He served on active duty in the U.S. Army Medical Corps from 1970 to 2000, and retired as a colonel. He was founder and chief of the Department of Membrane Biochemistry (now the Laboratory of Adjuvant and Antigen Research) at WRAIR from 1978 to 2017. As a civil service employee, he was a medical officer, lab chief, and supervisory scientist at WRAIR from 2001 to 2017. He is an adjunct professor of microbiology and immunology at the Uniformed Services University of the Health Sciences in Bethesda, MD.

He developed an early successful application of liposomes as drug carriers for treatment of leishmaniasis. He is the co-inventor of the technique of needle-free transcutaneous immunization, a technology that is being commercially developed for vaccination by skin patch. He has been an author or coauthor on 325 scientific publications (more than 260 peer-reviewed papers) in the fields of adjuvants, antigens, antibodies, complement, lipid biochemistry and immunology, and liposomes as drug carriers and carriers of vaccines, and he sits on numerous editorial boards. He has created adjuvants for many types of experimental vaccines, including vaccines to malaria, HIV, meningococcal infection, heroin addiction, biological threat agents, and prostate and intestinal cancer. He holds 33 U.S. patents, the latest of which is Army Liposome Formulation with QS21 (ALFQ). His current research interests are focused on vaccines to HIV-1 infection, malaria, and addiction to drugs of abuse.

Dr. Alving was a founding member of the International Endotoxin Society; and a founding member and a previous director of the International Liposome Society. He was elected chairman of the fifth Gordon Research Conference on Drug Carriers in Biology and Medicine. In recognition of his contributions to the liposome field, he was the third recipient of the Alec Bangham Award for lifetime contributions to liposome research. He is a Fellow of the American Association for the Advancement of Science, and a Fellow of the National Academy of Inventors.