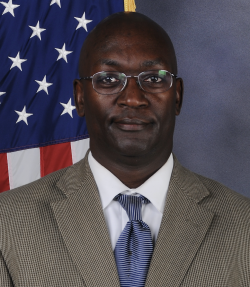 Mr. Edward Sekonde is the Deputy Director for Research Operations for MHRP at the Walter Reed Army Institute of Research (WRAIR).  He oversees administrative and research operations for MHRP. Additionally he also serves as the Contract Officer Representative (COR) on a contract. Previous to this position, Mr. Sekonde served for 9 years as the Country Director for the WRAIR program in Tanzania based at the United States Embassy.  Previous to this position Mr. Sekonde was Director of Public Health at the American Indian Higher Education Consortium in Virginia, where he managed public health capacity building programs at several American Indian/Native American colleges.  Mr. Sekonde also spent four years with the State of Washington as a Health Program Manager with the Washington State Health Care Authority.  Early in his career Mr. Sekonde worked as a consultant at the World Bank in Washington DC.  Mr. Sekonde graduated from the University of Washington in Seattle with both a B.A. in Business Administration and a Masters in Health Services Administration.